Phase five of the Coupled Model Intercomparison Project (CMIP5) experimental protocol has been confrimed by the 12th Session of the JSC/CLIVAR Working Group on Coupled Modelling (WGCM) and is presented in the following document:

In addition to the centennial climate change simulations, the CMIP5 experiment design has a near term component. The following figure, taken from Taylor et al. (2009) shows a summary of the near term experiments in greater detail. These are multi-model and multi-institutional experiments aimed at improving our understanding of the physical climate system and our ability to predict its evolution on timescales from seasons to decades. 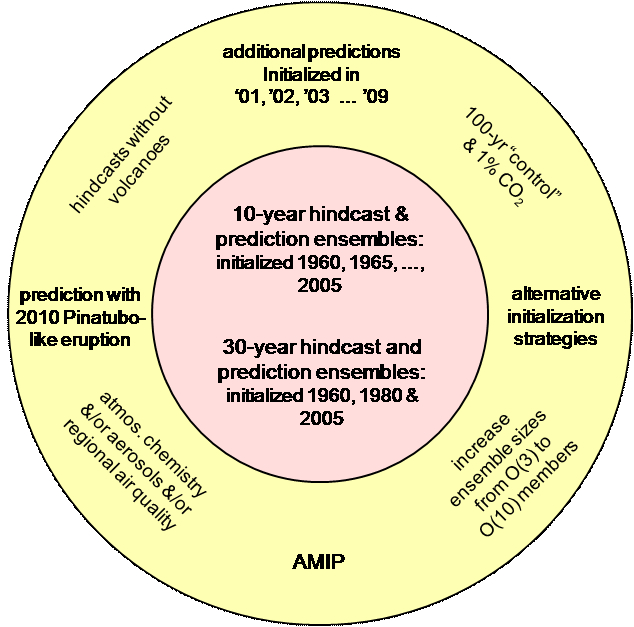 There are two core near term experiments, one a set of 10 year hindcasts or predictions initialized from climate states in the years 1960, 1965, 1970, and every five years to 2005, with this last simulation representing the sole actual prediction beyond the present (i.e., beyond 2009). In these 10-year simulations, it will be possible to assess model skill in forecasting climate on time-scales when the initial climate state, particularly the ocean initial conditions, may exert some influence. The other core experiment extends the 10-year simulations initialized in 1960, 1980, and 2005 by an additional 20 years. Groups can participate in the near term experiments without running the climate simulations, provided they generate the short 20th century runs as controls. The complete list of near term experiments is provided in Table A of Taylor et al. (2009).

The external forcing prescribed for the experiments is based on the observational record for the past and adopts the mid-range RCP4.5 scenario for the future. The choice of future scenario is not critical since forcing differences are small on these relatively short timescales, although the treatment of tropospheric aerosols is a potential source of uncertainty as these may change rapidly. Since volcanic eruptions cannot be predicted their occurrence is also a source of uncertainty for decadal forecasts although once they have occurred their effects become part of the forcing. Past volcanic eruptions are to be included in the hindcast simulations , which may partially over-estimate skill because of this. The error associated with future eruptions can in any case only be partially quantified from the impact of past eruptions in the hindcasts, since the error depends on the characteristics of each eruption. The experiment protocol includes a tier-1 suite of sensitivity experiments on the effect of including or not a Pinatubo-like eruption.