The GLACE-CMIP experiment investigates the role of soil moisture-climate feedbacks for the climate system in past and future climate, in the context of a CMIP set-up. It was first conducted in parallel to the 5th phase of the Coupled Model Intercomparison Project (GLACE-CMIP5, Seneviratne et al. 2013). The overall set-up builds upon the experimental design of the first phase of the Global Land-Atmosphere Coupling Experiment (GLACE, Koster et al. 2004), which investigated the role of soil moisture for subseasonal to seasonal climate predictability. Soil moisture is prescribed in the experiment by using a reference soil moisture timeseries. While GLACE used the soil moisture time series of an ensemble member in the context of 3-month 16-member ensembles experiments, the core GLACE-CMIP5 experiments use reference soil moisture climatologies, either from late 20th century or using a transient 30-year climatology (Figure 1). This allows to jointly assess the feedbacks in climate change projections induced by mean changes and the interannual variability of soil moisture. The GLACE-CMIP5 experiment was conducted by 6 ESM groups (ACCESS, CESM, EC-EARTH, GFDL, IPSL, MPI-ESM). A forerunner study used a similar set-up in a regional climate model framework (Seneviratne et al. 2006). 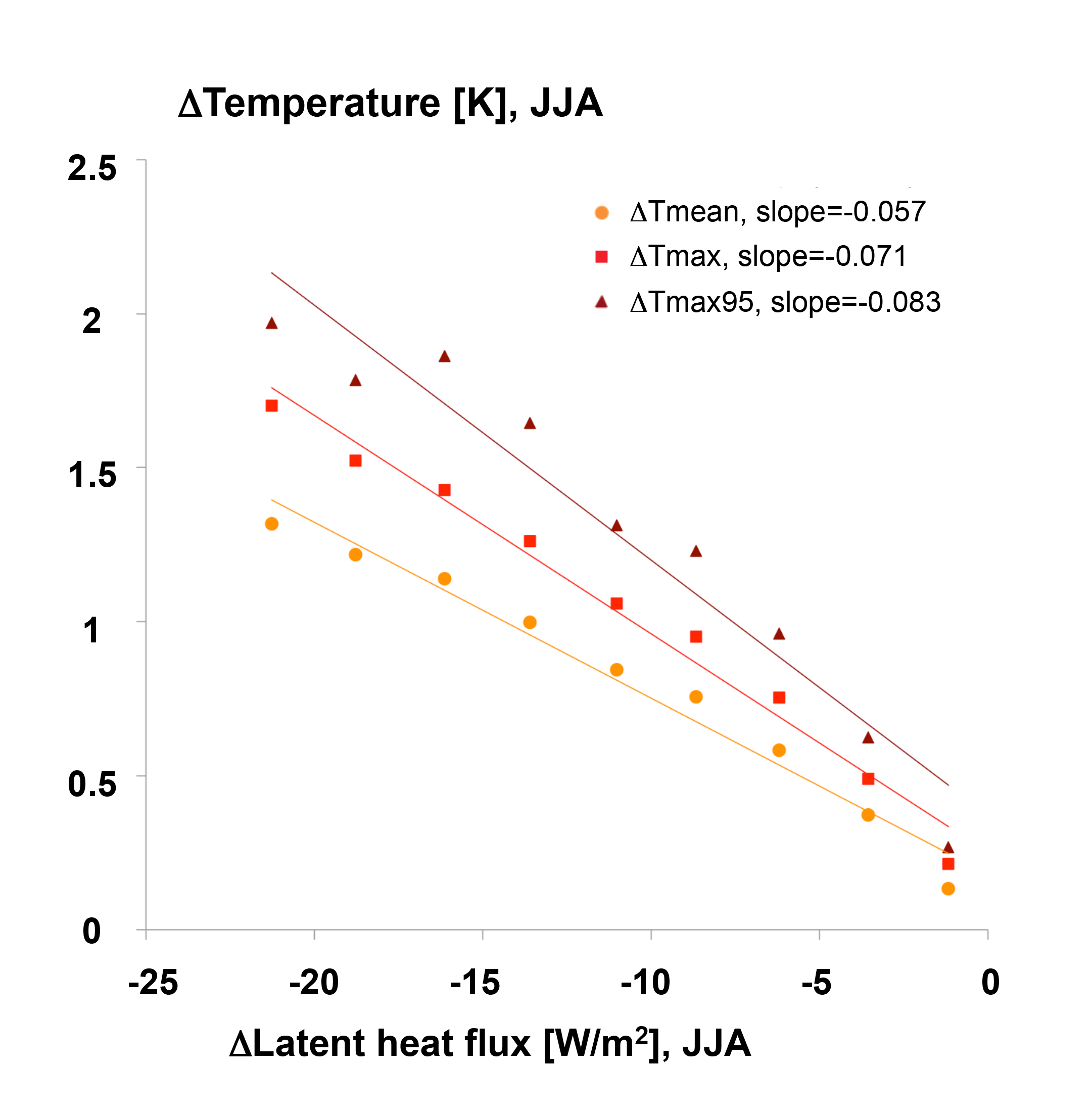 First results for 5 of the participating ESMs were analysed in Seneviratne et al. (2013), focusing on the feedbacks induced by mean changes in soil moisture in the CMIP5 projections. They reveal that projected soil moisture changes lead to substantial feedbacks in several regions in both boreal and austral summer. Strong and consistent effects are found on temperature, especially for extremes (about 1– 1.5K for mean temperature and 2–2.5K for extreme daytime temperature, see Fig. 2). In the Northern Hemisphere, effects on mean and heavy precipitation are also found in most models, but the results are less consistent than for temperature, suggesting a strong model dependency of the underlying feedbacks. A direct scaling between soil moisture-induced changes in evaporative cooling and resulting changes in temperature mean and extremes is found in the simulations (Fig. 2, right). In the Mediterranean region, the projected soil moisture changes affect about 25% of the projected changes in extreme temperature. Other on-going analyses are investigating the covariability of temperature and precipitation in the experiments and its relation to soil moisture feedbacks (Berg et al., submitted), as well as changes in climate extremes in the overall 6-ESM GLACE-CMIP5 ensemble (Lorenz et al., in preparation).