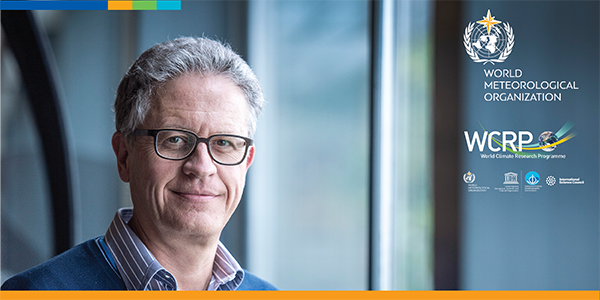 The Climate of Tomorrow: Building the Knowledge for Earth Stewardship

See full details of the program below.

In May 2019, the World Meteorological Organization (WMO) launched a series of public science lectures, under the leadership of WMO Chief Scientist Pavel Kabat. World-leading experts in the fields of weather, climate, water, the environment, and other related areas will be invited under this initiative to lecture and dialogue with the WMO community, partner organizations and other Earth system professionals. The inaugural lecture was co-organized with the World Climate Research Programme (WCRP).

Professor Thomas Stocker, Professor of Climate and Environmental Physics at the University of Bern and former Co-chair of Working Group I of the Intergovernmental Panel on Climate Change (IPCC) presented a lecture that will examine the path we have taken to reach today’s firm scientific basis on climate change, which has led to five comprehensive assessment reports from the Intergovernmental Panel on Climate Change (IPCC) and to the Paris Agreement of the United Nations Framework Convention on Climate Change. He discussed the contributions of the World Meteorological Organization (WMO) and its World Climate Research Programme (WCRP) to climate science and outline four specific challenges for WMO and its programmes that will need to be met in order to confront anthropogenic climate change and build the knowledge required for robust and timely Earth stewardship.

This lecture was open to the public. Remote participation was also possible (link now removed).

Professor Pavel Kabat is the Chief Scientist and Research Director of the World Meteorological Organization (WMO). He leads the overall strategic direction of WMO science and its underlying research activities, including the World Climate Research Programme, the World Weather Research Programme and WMO’s Global Atmosphere Watch, which monitors greenhouse gas concentrations, air quality, and the ozone layer. He is also a Professor of Earth System Science at Wageningen University in the Netherlands, Founding Chair and Director of the Royal Dutch Academy of Sciences and Arts Institute for Integrated Research on the Wadden Sea Region, member of the Leadership Council for the UN Sustainable Development Solutions Network and Co-Founder of the high-level Alpbach – Laxenburg Group.

Professor Kabat was previously Director General and Chief Executive Officer of the International Institute for Applied Systems Analysis (IIASA), an independent, international science and science-to-policy institute. His research career spans almost 30 years and has covered many aspects of Earth system science and global change, with a specific focus on land-atmosphere interactions, climate hydrology, the water cycle, and water resources. He has received many awards and honors for his contribution to science, including the Austrian Cross of Honor for Science and Art, First Class, and the Order of the Netherlands Lion.

Thomas Stocker is Professor of Climate and Environmental Physics at the University of Bern. He has held research positions at University College London, McGill University (Montreal), Columbia University (New York) and University of Hawai'i (Honolulu) and has authored or co-authored more than 200 peer-reviewed papers in the area of climate dynamics and paleoclimate modeling and reconstruction.

From 2008 to 2015 he served as Co-Chair of Working Group I of the UN Intergovernmental Panel on Climate Change (IPCC) that provided the scientific foundation of the Paris Agreement. Thomas Stocker holds two honorary doctorates (University of Versailles and ETH Zürich) and received numerous awards for his work. He is a Foreign Honorary Member of the American Academy of Arts and Sciences and received the Swiss Science Prize Marcel Benoist in 2017. (source)

Professor Detlef Stammer is Head of Remote Sensing and Assimilation and Director of the Center for Earth System Research and Sustainability at the University of Hamburg, Germany. Detlef Stammer's research interests include the role of the ocean in climate variability and sea level change. He was appointed as a member of the WCRP JSC in 2019 and elected as JSC Chair shortly thereafter. Previously, he co-chaired the Scientific Steering Group of WCRP's Climate and Ocean Variability, Predictability and Change (CLIVAR) Core Project and the WCRP Grand Challenge on Regional Sea-level Change and Coastal Impacts.

Dr. Helen Cleugh is the Chief Research Scientist and the Director of the Climate Science Centre in the Ocean and Atmosphere Division of CSIRO (Australia’s national science agency). She is an atmospheric scientist with almost 30 years’ experience combining research discovery, delivery, and leadership. Her research expertise lies in quantifying the interactions between the land surface and the atmosphere, and their effects on weather, climate and hydrology, as well as water-use and carbon uptake. Helen was appointed as a member of the WCRP JSC in 2015 and elected as Vice-chair in 2019.

Dr. Amy Luers is the Executive Director of Future Earth and has over 20 years experience working on sustainability at the intersection of science, technology, and policy. This included positions of Director of Climate at Skoll Global Threats Fund (SGTF), Assistant Director for Climate Resilience and Information at the White House Office of Science and Technology Policy (OSTP) and a number of years at Google as the Senior Environment Program Manager. She has published in both academic and the popular media on issues related to vulnerability to global environmental change, data, sustainability, climate policy, and science communication.

Dr. Maxx Dilley directs the Climate Prediction and Adaptation Branch at the World Meteorological Organization. Prior to joining WMO he led the Disaster Risk Reduction and Recovery Team and was a policy and partnerships advisor at the United Nations Development Programme. He was previously a Research Scientist in the International Research Institute for Climate and Society (IRI) at Columbia University in New York, where he directed the Africa program and co-directed climate impacts research. Before that he worked for two years at the World Bank Disaster Management Facility and for seven years at the U.S. Agency for International Development’s Office of U.S. Foreign Disaster Assistance.

There was no charge to attend the event. A valid identity document (such as a passport) was required to enter the building.

2. WMO inaugural public science lecture by Thomas Stocker on "The Climate of Tomorrow"