A lack of detailed information on climate change for impact and adaptation planning led, in 2009, to a call by WCRP for greater coordination across downscaling activities. This eventually resulted in the design of the CORDEX framework, and CORDEX became a formal WCRP Programme in 2012. In the short time since, CORDEX has evolved into a major developer and producer of regional climate science and information.

Global Climate Models can provide projections of how Earth’s climate may change in the future. They hence form an important scientific basis for decisions on climate change mitigation. Climate change impacts and adaptation strategies in response to a changing climate, however, concern national and local scales, which is why regional climate downscaling is needed for more detailed and accurate projections.

The Coordinated Regional Climate Downscaling Experiment (CORDEX) is a Programme under WCRP with the vision to advance and coordinate the science and application of regional climate downscaling through global partnerships.

In practice, CORDEX is a global, bottom-up driven, collaborative initiative aiming to develop and provide detailed, regional climate information necessary for studies on vulnerability, impact and adaptation (VIA) at local and regional level. CORDEX is working to meet the increasing need for reliable regional climate information which in addition is to be communicated in ways that enable effective impact and adaptation planning. CORDEX provides a global framework with common protocols for the development and intercomparison of high-resolution projections. Archiving standards ensure that all results remain accessible.

The emergence of regional issues in climate science is being increasingly recognized across global coordination initiatives which facilitate research on all aspects of the Earth system. For example, the upcoming IPCC AR6 report will feature three chapters with regional focus. As further examples, the crucial role of future crop planning for the food basket regions of the world is more and more acknowledged, as is the relevance of regional predictions for the energy sector.

The CORDEX objectives, in detail, are:

All of the above objectives require underlying model development, along with the infrastructure and tools that support the assessment, dissemination and informed use of regional climate information as well as necessary training and capacity building efforts.

CORDEX has become the primary international program on climate downscaling. It attracts an increasingly large scientific community that holds key expertise on both statistical and dynamical downscaling. CORDEX climate scientists are involved in research on each of its fourteen regions which together span all major land areas of the planet plus the Arctic Ocean.

14 CORDEX Domains covering all land areas and the Arctic

In addition to the simulations carried out for the complete domains, more regionally focused exercises are necessary. For this, CORDEX has identified both specific regional challenges and cross-cutting themes. The regional challenges are specific focus areas that complement the WCRP Grand Challenges. The cross-cutting themes combine to strengthen the focus on topics, tools or structural questions which are common to all regional issues:

The cross-cutting themes and focus areas, all of relevance to one another, are summarized in the following CORDEX “regional challenge matrix”: 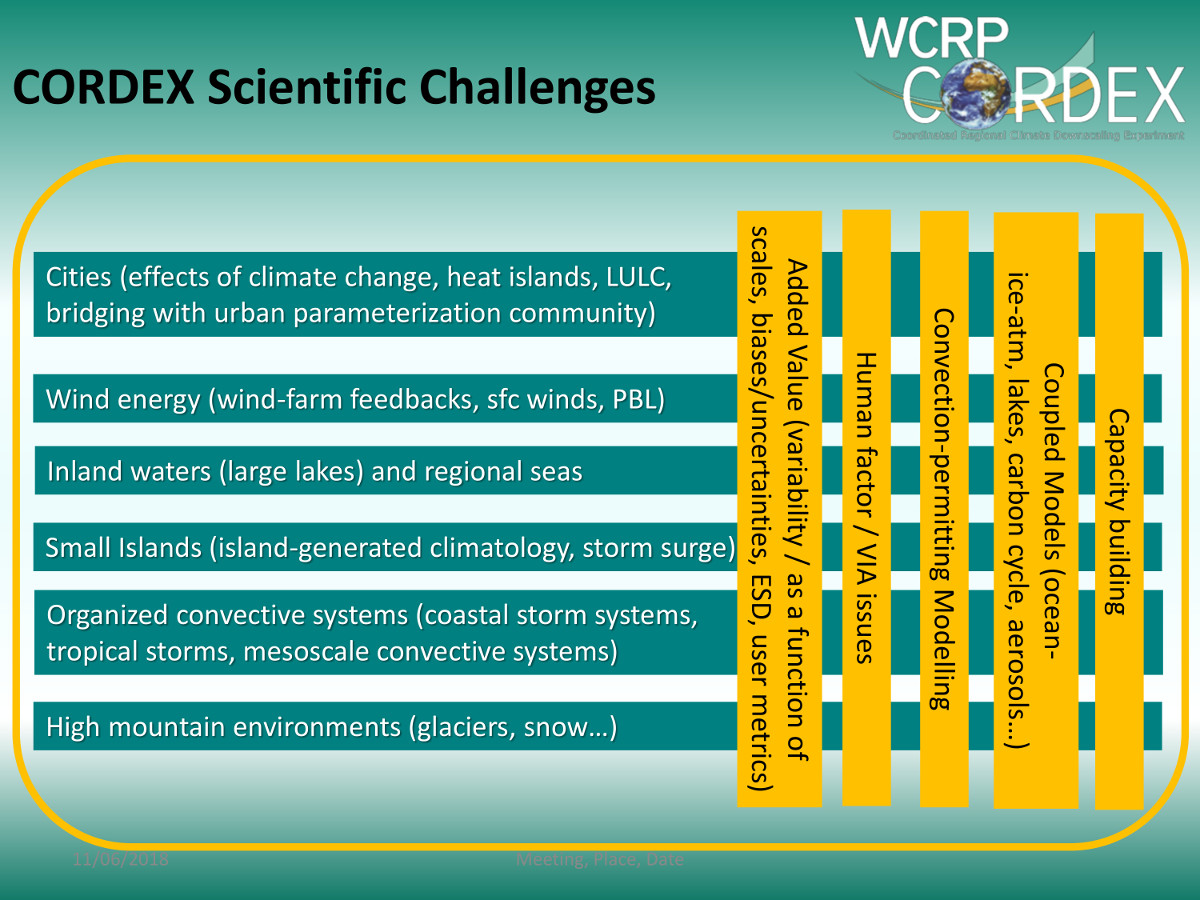 To address the CORDEX scientific challenges, CORDEX has issued calls for Flagship Pilot Studies (FPSs). The FPSs must have local and/or regional focus, studying fine scale processes and producing methods that can transfer to other regions. They should also include a plan for conveying the outcomes to other users of climate information. Seven FPSs have been endorsed since the first call in February 2016. These have resulted in fruitful collaborations and positive networking effects, including the participation of disciplinary experts not previously engaged in CORDEX activities.

To address the needs of the IPCC, CORDEX is establishing the CORE (Coordinated Output for Regional Evaluations) program which will consist of a succinctly structured core set of regional simulations. CORDEX is also a diagnostic MIP under CMIP6.

CORDEX has contributed to advancing the scientific understanding of regional climates as well as the production of and access to regional climate data and information. However, knowledge gaps persist, and further development of models, infrastructure, tools and knowledge is necessary.

The diverse group of users of CORDEX regional climate information can be exemplified by:

CORDEX activities have direct implications for vulnerability, impact and adaptation (VIA) studies. As such, CORDEX acts as a bridge across different disciplines of the natural and socio-economic sciences, from climate to impact and adaptation science. CORDEX is also a centerpiece of emerging research on the so-called "distillation" issue – that is, on how to extract robust and actionable climate information from large and diverse ensembles of sources and models.

CORDEX coordinates, promotes and supports meetings, workshops and conferences in all 14 CORDEX domains. CORDEX meetings and conferences bring together scientists as well as stakeholders and users from the international regional climate community. CORDEX events provide platforms to promote existing and new collaborations and expand or build new networks. They also serve to further capacity development, training and knowledge exchange for scientists from developing countries.

To date, three international CORDEX conferences on regional climate have been organized. The most recent thereof was the “International Conference on Regional Climate – CORDEX 2016” (ICRC-CORDEX 2016). Held in Stockholm on 17-20 May 2016, it attracted around 350 participants and put particular emphasis on added value, vulnerability, impact and assessment (VIA) issues as well as future advances in producing climate information for regions. The conference also promoted the CORDEX goal of building capacity for regional climate science in developing and transition regions. Moreover, recurring challenges and further opportunities for CORDEX were identified, which will be part of the objectives for the ICRC-CORDEX 2019 conference to be held in Beijing, China. These topics include the distillation of information from data; risk analysis and uncertainties; the need for more Earth system modelling; convection permitting modeling; as well as representing and projecting extremes at scales useful for impact assessments.

Since its inception, CORDEX has worked on capacity building. For example, CORDEX might support participation in meetings, conferences and workshops or organize specific, targeted workshops. A prominent example of the latter was a workshop series in Africa on “CORDEX Africa Analysis” (2011-2012 and 2015-2017) and the CORDEX Africa Impact Atlas. The Atlas was presented for discussion at COP22 in Marrakech and at SBSTA-48 in 2018. Sponsored workshops have also been held in Asia, and a recent one end of June 2018 in Bolivia (sponsored by WCRP/CORDEX and SMHI). Members of both the modeling and impact/adaptation communities have attended CORDEX workshops, which resulted in new networks of collaborations and numerous peer-reviewed articles.

CORDEX results have been used in other capacity building and adaptation efforts such as the Arab Climate Change Assessment Report, an interim report on Climate Change over India, the Hindu Kush Himalayan Monitoring and Assessment Programme (HIMAP) report and an assessment of climate change impacts on water resources in India. CORDEX results have also been the basis of numerous PhD and Master theses around the world.

CORDEX has, over the course of its history, produced large amounts of data that are made available to all interested users. The primary means of distribution are via the ESGF nodes, Regional Data Portals, Impact Portals and individual modelling groups' servers. Simulation output is available at resolutions from 12 to 50 km for all CORDEX domains.

In addition to its activities in dynamical and statistical downscaling, CORDEX works with the Global Framework for Climate Services (GFCS) and other organizations to produce credible, actionable information from CORDEX data.

Several hundred peer-reviewed articles are based on CORDEX information and research efforts of the global CORDEX community.

Like other WCRP projects, scientists involved in CORDEX work on a voluntary basis, but are the key to success of CORDEX initiatives and contributions to regional climate downscaling. Scientific guidance to CORDEX is provided through a Science Advisory Team (SAT) with multiple tasks:

Additionally, Points of Contact (POCs) exist for each of the 14 CORDEX domains. These play an important role in carrying out and advancing the CORDEX vision and linking the CORDEX community of their respective domain with the SAT, among others. Within each region, the POCs foster cooperation on domain-specific and overall regional climate matters and coordinate as well as mobilize resources for regional activities and outreach.

The International Project Office of CORDEX (IPOC) serves as secretariat coordinating and supporting CORDEX activities. It is hosted by the Swedish Meteorological and Hydrological Institute and operates under IPOC Director Iréne Lake.

By now you really feel the urge to know more and to get involved in CORDEX – right!!

This is how you do it:

To get involved more actively in CORDEX research, you can contact the CORDEX activity leaders through the SAT/POC links above. We are eager to expand the CORDEX community further and to involve new scientists at all stages in their career, including students. Ideas on emerging regional issues can always be discussed. If your institution or group would like to actively take part in CORDEX modelling, you are welcome to contact the CORDEX International Project Office or your Point of Contact. There is also the opportunity to become a CORDEX Point of Contact yourself, which implies a more integrated role in facilitating and fostering the advancement of climate science in your region.

To learn more about what is in the CORDEX pipeline, please see the following links: