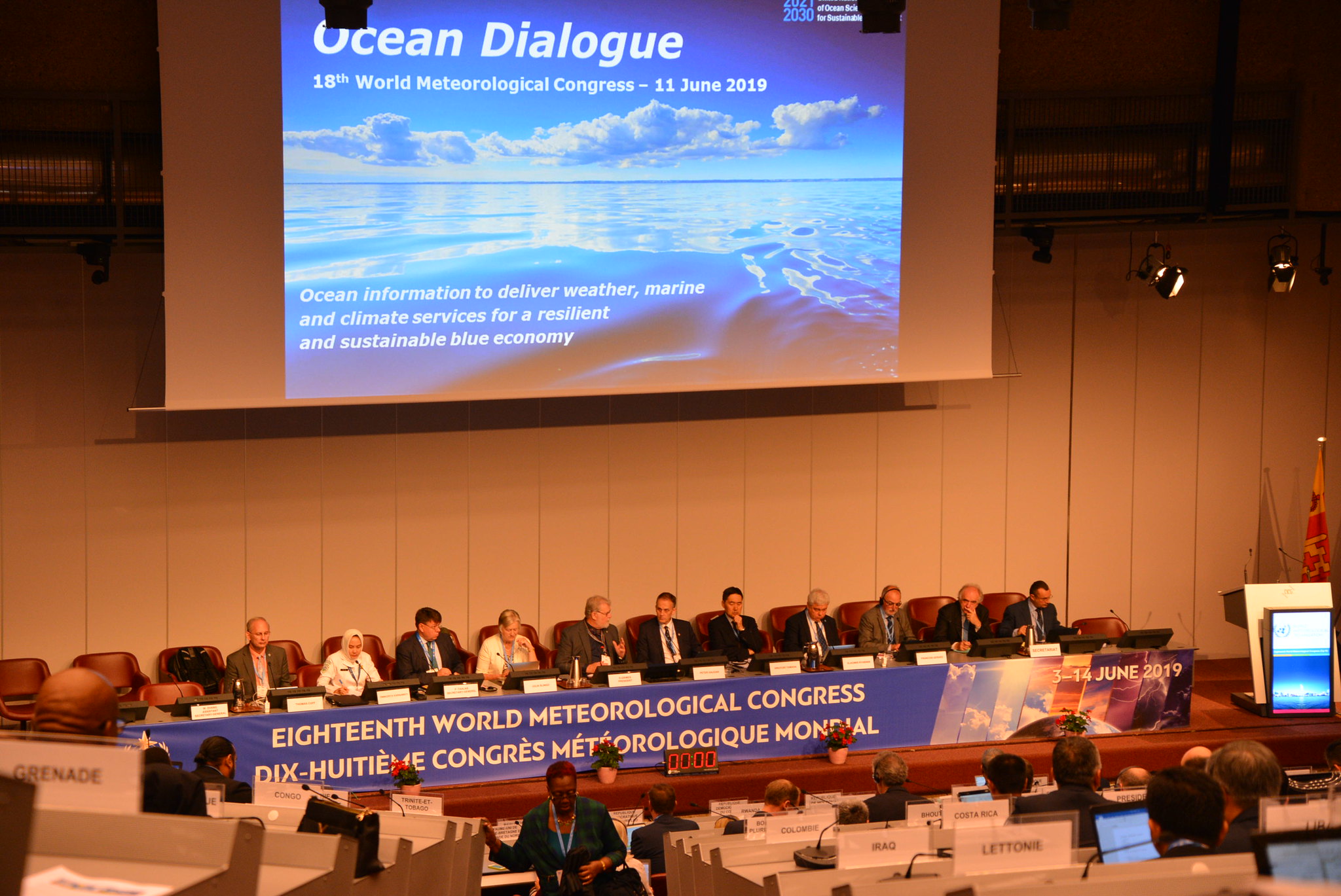 The 18th World Meteorological Congress' Research Day was held on 11 June 2019 and focused on the world's oceans as well as connections between the World Meteorological Organization (WMO), WCRP, their partner organizations, climate projections, and policy. The research day was organized into three sessions: an Ocean Dialogue, a panel focusing on science for policy, and a panel on Earth system research. The above photo shows the opening Session on the world's oceans.

The first Session, the Ocean Dialogue, focused on "Ocean Information to deliver weather, marine and climate services for a resilient and sustainable blue economy". It showcased increasingly close collaboration between WMO and its partners on oceans, notably including the Intergovernmental Oceanographic Commission of UNESCO (IOC-UNESCO) and the International Maritime Organization (IMO). A strong message for action, also in view of the UN Climate Action Summit in September 2019, was delivered remotely by H.E. Peter Thomson, UN Secretary-General’s Special Envoy for the Ocean: https://www.youtube.com/watch?v=ConzoE0VJkY .
The full list of speakers during the Ocean Dialogue and their biographies can be viewed on the WMO homepage: https://public.wmo.int/en/eighteenth-world-meteorological-congress-cg-18/special-events/ocean-dialogue .

The second Session on "Science for policy - IPCC" was opened by IPCC chair Hoesung Lee. He informed WMO members on the latest IPCC assessments as well as other developments at IPCC since the last WMO Congress of 2015. Lee also reported on progress on the IPCC's upcoming Sixth Assessment Report, as well as the Global Stocktake, and future Special Reports.

The WCRP Joint Scientific Committee's chair, Detlef Stammer, gave an overview of WCRP, its mission, and its history, as well as the interlinkages between WCRP, the WCRP Coupled Model Intercomparison Project (CMIP), and IPCC, the work of which WCRP substantially underpins.

Pavel Kabat then opened a brief panel discussion on the question of how the value chains between the science community, CMIP, IPCC and users of information can be improved. Panelists replied by underlining the importance of both the technological and human resources feeding the CMIP, WCRP and IPCC enterprises, as well as sustained observations and investment into science.

The third Session on "Scientific knowledge of the Earth system" convened seven high-level panelists who highlighted different examples of benefits that science and research bring into their country's or agency's operational services. That and other Congress sessions thus backed a strategic shift to a more integrated “Earth system” approach that aims to break down barriers between different research fields, as well as approving plans to better connect science with services and policymaking. This shift is part of a wider reform package under discussion at the congress that includes the creation of a new WMO research structure. The reform aims to make WMO-coordinated research seamless and ensure that scientific inputs from academia, fundamental and applied research institutions, and the UN agency can be better harnessed worldwide. Working with a range of partners, WMO has long been at the forefront of seamless collaboration in research, through projects including the Global Atmosphere Watch, the World Climate Research Programme and the World Weather Research Programme. It has already initiated consultations within and outside of the traditional WMO hydro-meteorological community, to strengthen strategic partnerships and to promote the co-design of relevant research activities with WMO members, partner programmes, and other relevant stakeholders and organizations.

The 18th WMO Congress' Research Day was concluded by the award of the International Meteorological Organization Prize to Antonio Divino Moura, who held his prize lecture on "The influence of Atlantic and Pacific oceans on the Rainfall over Tropical South Africa".