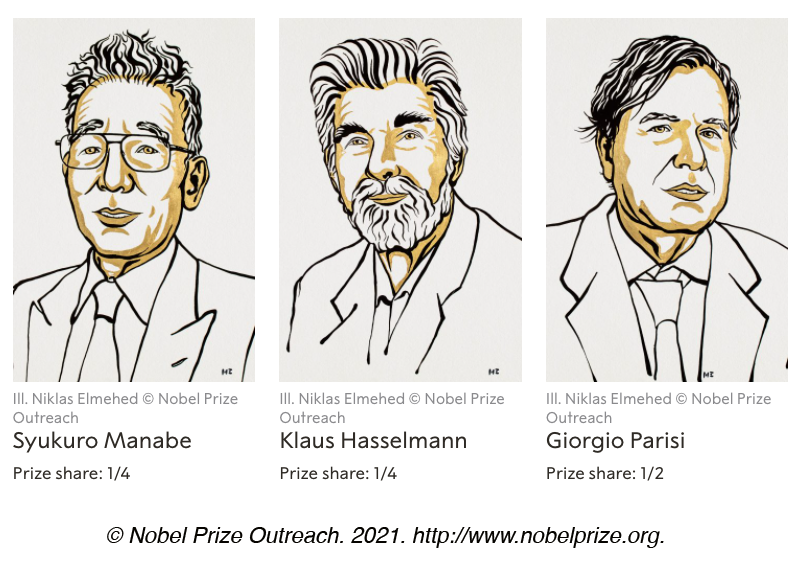 We are delighted that the pioneering work of Syukuro Manabe (Princeton University, Princeton, NJ, USA) and Klaus Hasselmann (Max Planck Institute for Meteorology, Hamburg, Germany) has been recognized by the Nobel Prize Committee, as having laid the foundation of our knowledge of the Earth’s climate and how humanity influences it. Likewise, we fully support the recognition of the contributions of Giorgio Parisi (Sapienza University of Rome, Rome, Italy), for his revolutionary contributions to the theory of disordered materials and random processes. Together, as the committee note, the work of Syukuro Manabe, Klaus Hasselmann and Giorgio Parisi “demonstrate that our knowledge about the climate rests on a solid scientific foundation, based on a rigorous analysis of observations.”

From a WCRP perspective we would specifically like to recognize the pioneering work of Syukuro Manabe and Klaus Hasselmann in climate modeling, which provided the foundation of modern climate research. Detlef Stammer, Chair of the WCRP Joint Scientific Committee, concluded that "the work of Manabe and Hasselmann is what allowed the climate science community to investigate how our climate will change in the future, given the many complex and interconnected physical processes that control climate. Without this work, WCRP Coupled Model Intercomparison Project (CMIP) experiments would not have been possible, and we would have much less basis for the Intergovernmental Panel on Climate Change (IPCC) Assessment Reports. The awarding of the Nobel Prize in Physics to these pioneers of climate science, at a time when we look to world leaders to address the urgency of climate change at COP 26, is both timely and appropriate."

See the official press release and details of the awards: https://www.nobelprize.org/prizes/physics/2021/press-release