WCRP Grand Challenge on Carbon Feedbacks in the Climate System 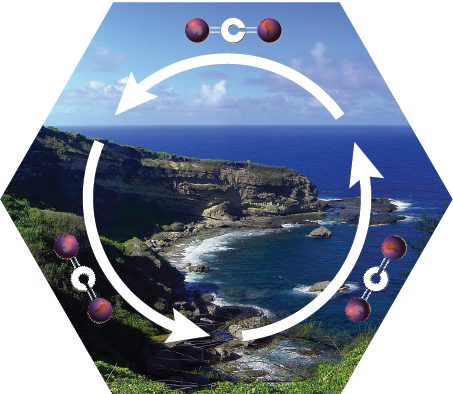 Human perturbation of our planet's carbon cycle, through the massive introduction of old carbon from fossil fuel sources into the modern atmosphere-land-ocean system, has altered and will continue to alter our climate. Very reliable measurements allow us to track carbon as carbon dioxide (CO2) in the global atmosphere but plants, soils and permafrost together contain at least five times more carbon and the global ocean at least fifty times more carbon than the atmosphere. Based on Global Carbon Budget estimates, CO2 emissions from fossil fuel combustion since 1870 have released about 400 GtC (Gigatonnes carbon) to the atmosphere while land use change - mostly deforestation - has released an additional 145 GtC. Of these cumulative human-induced CO2 emissions, 230 GtC have accumulated in the atmosphere over that time while the ocean and land ecosystems have taken up roughly 155 GtC and 160 GtC, respectively. These land and ocean carbon 'sinks', by absorbing more than half of the human-produced carbon, have so far mitigated the accumulation of CO2 in the atmosphere and moderated climate change. In the absence of these sinks, current atmospheric CO2 would already have reached concentrations about twice as large as pre-industrial CO2 concentrations with an estimated global warming response of greater than 2°C.

This WCRP Grand Challenge on Carbon Feedbacks in the Climate System addresses the durability and persistence of land and ocean carbon sinks. How do they currently operate? Will they continue to function in a efficient and protective manner as climate changes? When climate models first included climate-carbon cycle feedbacks, those models indicated the potential for global carbon sinks to weaken significantly as the climate warmed, suggesting a worrisome feedback loop in which warming led to weaker sinks which led to higher atmospheric concentrations which led to more warming. Subsequent inter-comparisons of several first-generation coupled climate-carbon cycle models (as part of WCRP's Coupled Model Intercomparison Project, CMIP) demonstrated that the variable impact and intensity of these carbon cycle feedbacks among models caused as much future climate uncertainty as water vapor-cloud or ice-snow-albedo feedbacks. Recent climate-carbon cycle model assessments, conducted in preparation for the Fifth Assessment Report (AR5) of the Intergovernmental Panel on Climate Change (IPCC), demonstrate persistent and significant uncertainty in future carbon sinks, particularly for land components. Large uncertainties remain about future carbon fluxes from tropical terrestrial ecosystems, about possible fluxes of CO2 and CH4 from thawing permafrost and changing wetlands, and about the current and future role of nutrients as factors that might limit carbon uptake by land plants. Most models identify the Southern Ocean as a key place for oceanic carbon uptake but the current variability of that sink and its response to future changes remain very poorly assessed and represented in models. These limitations on our ability to understand and predict carbon sinks have crucial implications for climate policies.

For more information see the white paper presented at the 37th Session of the WCRP Joint Scientific Committee in April 2016.

Carbon Feedbacks in the Climate System