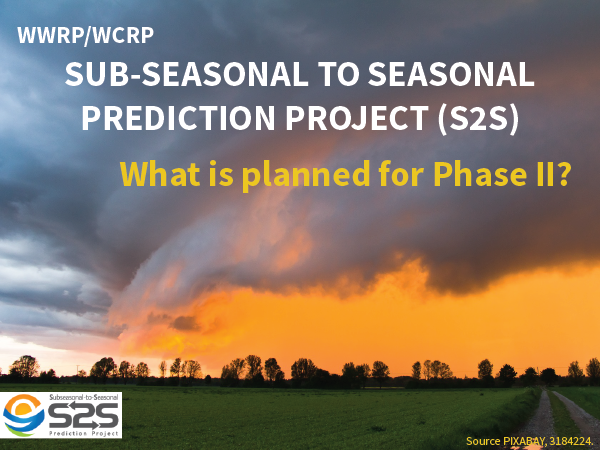 Background: The first phase of S2S

The Sub-seasonal to Seasonal Prediction Project (S2S) was launched as a joint project of the World Climate Research Programme (WCRP) and the World Weather Research Programme (WWRP) in November 2013. It has the primary goals of improving forecast skill and understanding the dynamics and climate drivers, to 'fill the gap' between weather forecasts and seasonal climate predictions, from two weeks to a season ahead (Figure 1). Special emphasis was put on high-impact weather events, developing coordination among operational centers via WMO’s Commission for Basic Systems (CBS), and on promoting uptake of S2S information by the applications communities, in the context of the Global Framework for Climate Service (GFCS). In WWRP, S2S is, together with the Polar Prediction Project (PPP) and the High Impact Weather project (HIWeather), one of the three activities that succeeded The Observing System Research and Predictability Experiment (THORPEX).

The S2S Database (Figure 2), launched in 2015, has enabled major research activity on S2S predictability, modeling, forecast verification, and product development, with over 40 articles published to date that use S2S database, and over 1000 users from over 90 countries. It contains sub-seasonal forecasts (3 weeks behind real time) and re-forecasts and is hosted by the European Centre for Medium-Range Weather Forecasts (ECMWF) and the China Meteorological Administration (CMA). A large subset of data is also included in the International Research Institute's (IRI's) Climate Data Library at Columbia University, USA (see separate article, in this issue). In its first five years, S2S has organized or co-organized over 18 science workshops or sessions and nine training courses. These events were aimed at building capacity, with many targeted at meteorological services and researchers from developing countries. Six S2S sub-projects were established to coordinate research and to foster the development of a global S2S climate and weather research community, and a series of case studies were carried out as part of the sub-project on extremes.

As a result of S2S' activities, the WMO Lead Centre for Long Range Forecasting and Multimodel Ensembles (LC-LRFMME) began a pilot real-time sub-seasonal Multimodel Ensemble (MME) prediction system in 2015, taking advantage of the S2S database at ECMWF, but without the 3-week delay placed on public access. Another payoff of the project is that all 11 operational centers in S2S now issue their forecasts every Thursdays (including the four models with daily forecast starts), compared with only 7 in 2013, greatly facilitating making multi-model forecasts.

While S2S can point to some major successes, much of the research, product development, and uptake by the applications communities are still in early stages, and a lot still needs to be done to realize the vision of skillful S2S forecasts of societal value. But what should a potential 5-year “Phase II” of S2S focus on? To inform future plans, a questionnaire was circulated to the research, modeling and operational communities for feedback.  Frequently mentioned gaps included:

Some of the database and operational gaps raised included a:

In addition, eight semi­-structured interviews were conducted with stakeholders from the larger community related to applications, services, donors, or other stakeholders. The interviews were conducted under the leadership of WWRP’s Working Group on Societal and Economic Research Applications (SERA), an expert group founded under THORPEX. The interviewees generally agreed that while the potential benefits of skillful S2S forecasts are high, several barriers hinder their realization, namely:

To maximize progress in filling these upstream and downstream gaps, a set of core activities was proposed for the second phase of S2S, scheduled to begin at the end of 2018: S2S database enhancement, research activities (new sub-projects), and enhancing operational infrastructure and user applications (Figure 3). Work will continue to maintain and enhance the current S2S database at ECMWF, CMA, and IRI, within the constraints of the in-kind support to S2S provided by these centers. Ocean variables will be added to the S2S database, as per the original plan, and more surface variables four times a day (instead of only once a day), such as 10m wind needed for energy applications, will be considered. Additional models may be added, such as the extended-range forecasts from the Indian Meteorological Department. 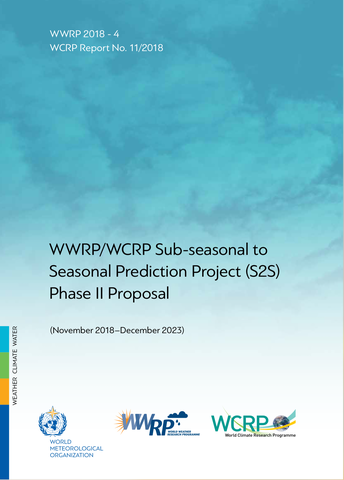 A new set of research sub-projects are in the planning stages, to build and strengthen collaborations between WCRP, WWRP and WMO projects and working groups as well as to address the needs highlighted in the gap analysis:

To promote user-uptake of S2S forecasts (which are delayed 3 weeks behind real time in the S2S database), a Real-time Pilot for S2S Applications research and demonstrations “S2S-SERA” is planned to make the S2S data available as close as possible to real-time during a limited period of time (1–2 years) for a limited number of users. GFCS has a focus on developing countries, particularly Africa, where several new projects have specific elements on sub-seasonal prediction, including W2-SIP (WISER), ForPAc (SHEAR) and SWIFT (GCRF). These projects offer exciting opportunities to coordinate on training, product development, and evaluation, as part of a real-time demonstration to trial products.

Please see the S2S website s2sprediction.net (maintained by the S2S International Coordination Office (ICO), hosted by the Korean Meteorological Agency) for more details and to get involved, to access the S2S database, read the S2S Newsletter (sign up on the homepage - published quarterly by the ICO), and where the Phase I Report, and Phase II Proposal and more can be found.