WCRP note, with great gratitude and admiration, the life of Sir John Houghton (30 December 1931 – 15 April 2020), who passed away last week in his beloved Wales. He had a long and distinguished career as an atmospheric physicist and leading climate change scientist who, among other things, was an early Chair of the World Climate Research Programme and the first Chair of Working Group I of the Intergovernmental Panel on Climate Change. He was part of the group which received the Nobel Peace Prize in Stockholm in 2007. In addition to his scientific work, he wrote several books explaining climate change to non-specialist audiences and advocated for the urgency of the need for political action. He was a true great in our field.

Click the link in the box below to learn more about Sir John, as remembered by other eminent leaders in the climate research community.

Sir John Houghton was a visionary and a leading light in global climate science. Born in a small village in North Wales, United Kingdom, he showed an early aptitude for physics and wanted to study the Earth and the planets. He went to Jesus College, Oxford at the early age of 16 to study for a BA in Physics and a DPhil in Atmospheric Physics. In 1958, he was appointed as Lecturer and, in time, Professor of Atmospheric Physics and Head of the Department of Atmospheric, Oceanic, and Terrestrial Physics. He led the Department into the era of Earth observing satellite measurements before moving on to head the Rutherford Appleton Laboratory and then the Met Office. While there, he played a pivotal role in the formation of the Hadley Centre for Climate Prediction and Research involving considerable discussions with Margaret Thatcher, the British Prime Minister. Here we look at his role in bringing a global dimension to climate and climate change research in the World Climate Research Programme (WCRP) and in the early years of the Intergovernmental Panel on Climate Change (IPCC).

Tributes to John from

While at Oxford University, Sir John worked for some years on the use of the carbon dioxide radiation absorption bands for stratospheric temperature profile measurements from satellites. In 1976, he was appointed to the WMO-ICSU1 Joint Organizing Committee (JOC ) for the Global Atmospheric Research Programme (GARP). In the same year, he began a two-year term as President of the Royal Meteorological Society. He was also a member of the JOC Board for the GARP Climate Dynamics Sub-programme. At that stage, the JOC was busy with preparations for the 1979 GARP Global Weather Experiment, but it found time to consider the second (climate) objective of GARP. This was subsequently to transition to the WCRP.

In February 1979, Sir John attended the (First) World Climate Conference in Geneva which led to the establishment of the World Climate Programme by the May 1979 World Meteorological Congress. A Joint Scientific Committee (JSC) for WCRP and GARP was formed to oversee the transition from GARP to WCRP, eventually becoming the JSC for WCRP. At its first session in Amsterdam in 1980, Joe Smagorinsky was elected as the first Chairman of the JSC, with Sir John elected as Vice-chairman. Sir John was the second Chairman (1982-84). One of his first tasks as JSC Chairman was to select a Director for the new Joint Planning Staff (JPS) to replace Professor Bo Döös. Professor Pierre Morel was appointed as JPS Director, and the JSC agreed on the TOGA (Tropical Ocean Global Atmosphere) and WOCE (World Ocean Circulation Experiment) proposals as the initial major thrusts for the new WCRP. Under Sir John's leadership, advances were made on implementing the TOGA and WOCE programs, whose scientific aims are now covered by CLIVAR. At the 1984 meeting, the Scientific Steering Group for the Land‑Surface Processes and Climate Programme (1984‑89) was created and contributed to the creation of GEWEX.

Sir John and Pierre Morel found themselves having to mount the defense, at sessions of the WMO Executive Council, for taking international research off into such bold new climate directions before the weather forecasting problem had been solved. Their task was made easier by the impact of the 1982-83 El Niño and Sir John's appointment in 1983 as the new Director General of the UK Meteorological Office, a position that brought him much deeper into the WMO community as a Permanent Representative of the UK with WMO. While his new position required that he step down as Chairman of the JSC, it also embedded a strong supporter of the WCRP within the senior ranks of the WMO Executive Council.

While Pierre Morel remained adamant that WCRP should focus on the basic physical mechanisms of climate (rather than too much emphasis on the emerging 'global change' agenda), they together played an important guiding hand for WMO involvement with the carbon dioxide issue up to and after the 1985 Villach Conference. Then, as the 1990 Second World Climate Conference approached, Sir John played a key role, in collaboration with the then JSC Chairman Professor Gordon McBean of Canada, in developing the basic concepts for the scientific assessment role of the IPCC in 1988 and the GCOS (Global Climate Observing System) in 1990. He chaired and personally guided the preparation of the IPCC's remarkable 1990 First Assessment Report on the science of climate change. Then, as one of his most significant international climate initiatives before stepping down as Chief Executive of the Met Office in December 1991, he hosted the January 1991 Winchester planning meeting for GCOS. He took on the chairmanship of the Joint Scientific and Technical Committee (JSTC) for GCOS until 1995 while continuing for several years as Co-Chair of IPCC Working Group I.

Sir John was an excellent choice as the founding Chair of IPCC Working Group I. He set up a process of selecting a small number of Lead Authors who would convene expert meetings to draft chapters, which would then be put out for peer review. He thus led the Group to successfully deliver its iconic First Assessment Report in 1990 to the 2nd World Climate Conference, and then played a decisive role in the creation of the UN Framework Convention on Climate Change in 1992, and subsequent reports.

It was Sir John who was determined that the IPCC assessments should be very different from the general run of UN reports; they should be attractive, accessible, and made widely available. To this end, he asked Cambridge University Press (CUP) if they would be interested in publishing them and, of course, they readily agreed. This was an inspired move and CUP are still publishing IPCC reports 30 years later. As part of that process, Sir John asked Andrew Gilchrist, a retired Director of the Met Office, to look at the prose and make it less turgid; many were concerned that he would disturb the wording of some of the hard-fought compromises in the text, but in fact Andrew Gilchrist did a magnificent job in improving its readability. Sir John also battled with WMO and the UN Environment Programme (UNEP) to ensure that all authors should be fully credited on the reports, against the prevailing custom of anonymity in the UN. This undoubtedly helped with achieving the final governmental approval of the reports in the Plenary in Sundsvall later in 1990, and also meant that IPCC were able to keep most of the scientists on board for future assessments.

One particularly difficult meeting, which Sir John opted to chair himself, took place in Bath in 1989 on the topic of paleoclimatology. The Russian scientists led by Academician Mikhail Budyko put forward their arguments that certain paleoclimates could be seen as suitable analogues for conditions to be expected in a future world. This view was not shared by many other delegates, particularly those from Europe and the US, who reasoned that, because the forcing mechanisms were so different (orbital changes versus greenhouse gas increases) the climate outcomes could also be quite different. Sir John chaired the meeting skillfully and diplomatically to ensure that the IPCC report reflected the best science.

A large part of the success that Sir John had in WCRP and in IPCC was down to his affable manner, entirely without airs and graces and with a gentle sense of humour. This helped to smooth many turbulent waters and bring about the scientific consensus required. Many have commented on these qualities in other parts of his life.

These reflections have only focussed on his roles at WCRP and in the setting up of the IPCC in the 1980s and early 1990s. They underline the far-sightedness of Sir John Houghton in his early recognition of the importance of global research programmes and their links to climate change policy. 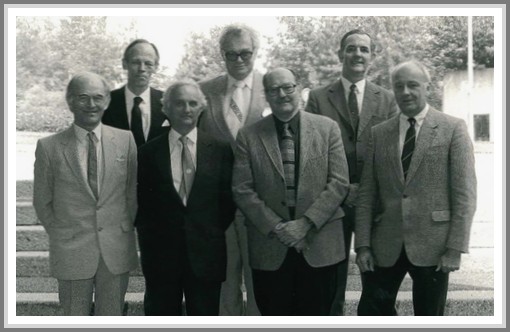 John Houghton was born to strict Baptist parents in Dyserth North Wales and grew up in Rhyl, where his love for the sea and mountains began. There's a sculpture of him in Rhyl alongside Don Spendlove and Mike Peters, and my sister once got him to take a picture with it: pic.twitter.com/3zvU5pYpTz