Tercio Ambrizzi is Full Professor at the Institute of Astronomy, Geophysics and Atmospheric Sciences (IAG), part of the Department of Atmospheric Sciences (DAS) at the University of São Paulo (USP) in Brazil. He completed his Ph.D. in 1993 at the University of Reading in the UK. He was then a lecturer and scientific researcher at IAG and, beginning in 1988.  He was also the head of DAS for 6 years. Since then he has been the Coordinator of the Climate Studies Group (GrEC) at IAG/USP and the General Coordinator of INCLINE (INter-disciplinary CLimate INvEstigation Center).

From 2002 to 2006 Terzio was Chief Editor of the Brazilian Journal of Meteorology and from 2009 to 2013 he was Director of IAG. He has reviewed the IPCC's AR4 and AR5 reports and has over 100 publications in peer-reviewed journals and book chapters, including the publication of two books (in Portuguese). During his career, he has had over 200 extended abstracts published in national and international conferences/congresses/symposiums and has supervised 20 M.Sc Dissertations, 13 Ph.D. Theses, and 10 Post-Doctoral assistantships. Tercio is a Member of the Brazilian Academy of Sciences. 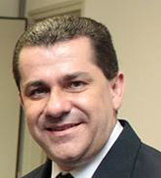